After a short break and some time to process her experience in Antarctica, we caught up with Inspiring Explorer Sadra Sultani to get her perspective on the expedition, and find out about the highlights of her trip, and the big challenges she faced.

Sadra has completed her first year of study towards a bachelor’s degree in Law and Political Science at the University of Canterbury. Her family is from Afghanistan, and she speaks English, Hindi and Dari. Sadra is a core member and youth coordinator for community organisations, Canterbury Resilience Foundation, and Who is Hussain? – Christchurch. She has led initiatives to encourage women and men in sport through netball and soccer tournaments and was one of the organisers of an Eid festival for the Muslim community in Christchurch, in mid-2019. Sadra has competed at a national level in dragon boating, and her team won the South Island Secondary Schools’ waka ama competition. 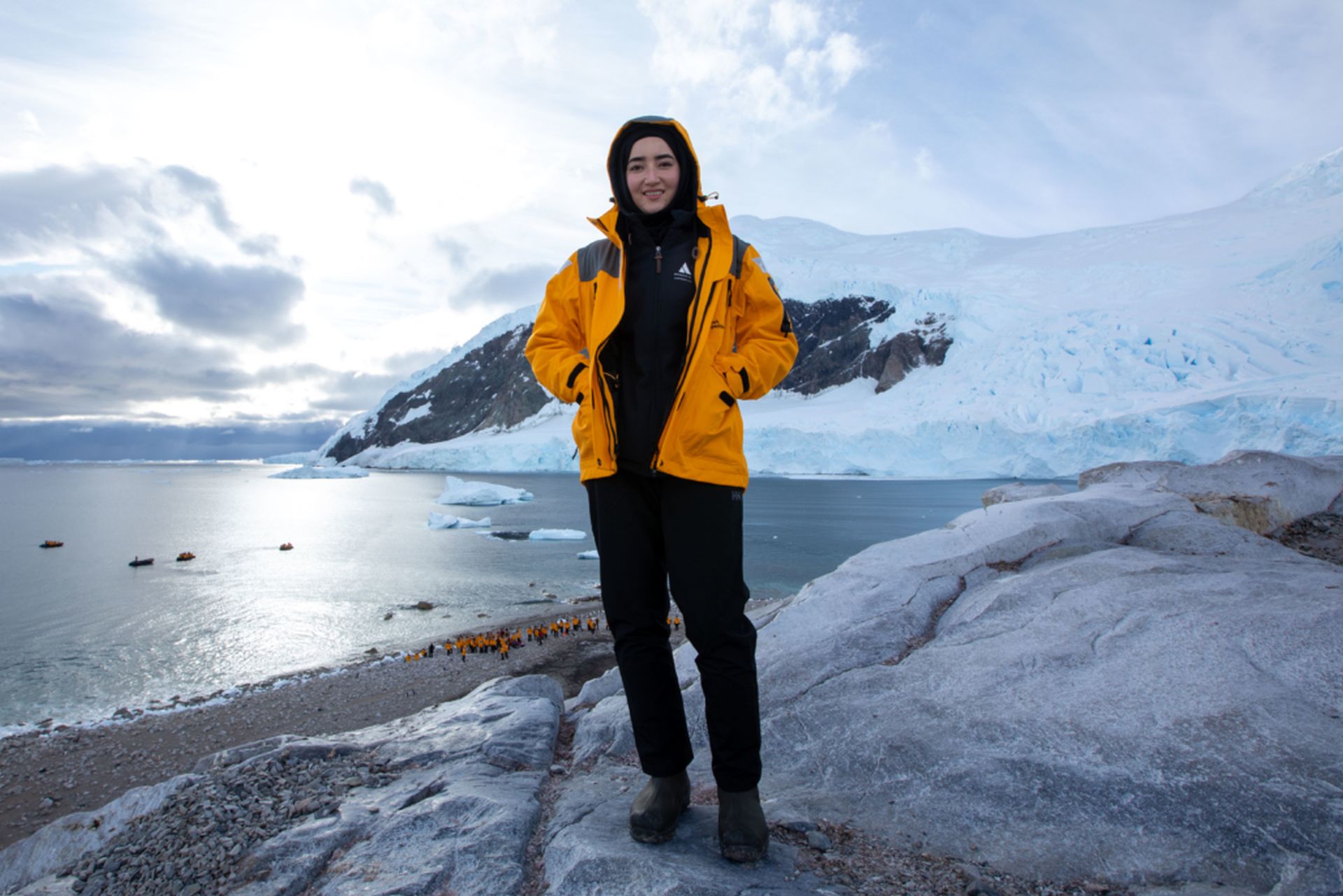 There were so many but seeing lots of different parts of Antarctica was definitely a highlight. It was an amazing feeling to get up each morning, open the curtains in my cabin, and see another beautiful scene. Several times I remember thinking, ‘it can’t get better than this’, but the next morning the view would be even more incredible.

I also loved being part of such a great team. The team building weekend was really good, as we all bonded before going on the expedition, and very quickly it felt like we had known each other for a long time.

What was the most challenging part? How did you conquer this?

The polar plunge was definitely a challenge for me, as I have a fear of deep water and had never done anything like this before. Muslim girls are not big swimmers as we have to stay fully covered in the water. Before I jumped, I was so scared, and couldn’t think straight for a second. But once I did it, I enjoyed it so much that I could have gone for a second round. I was so proud of myself! I thought about the deep water sometimes when we were kayaking, as there was a chance of us flipping, but I knew I had so many people to support me. By the end of the expedition, I felt like I was born to do this!

When I was kayaking in deep waters, I discovered that with the right support, sometimes you can face your biggest fears unconsciously, without thinking about them too much or being too fearful. The penguins zooming through the water, flipping, and jumping around were incredible. I never realised how fast they move underwater. Seeing the whales was also a highlight. As these beautiful, elegant creatures came near our team would all stop kayaking and go silent. To hear them slowly splashing around us and to see their tails breaking the water was incredible. Seeing avalanches caused by icebergs collapsing down and hearing the noise like thunder when it happened was a shock but also great to see.

How did going to Antarctica make you think about the historic polar explorers? In what way did these reflections impact on your personal experience?

I remember sitting on a cliff admiring the view and thinking about how what we had seen in photographs or on YouTube before the expedition doesn’t do justice to the beauty of Antarctica. I tried to imagine what it must have been like for the historic explorers, who had no idea what they were getting themselves into or what the continent looked like. It must have been so overwhelming to discover a place like this, and also hard for them going through the tough times they did without any of the luxuries we had on our ship.

Everything about Antarctica was quite surprising to me. I had seen all the ice and icebergs in photographs but didn’t expect to see so many amazing snow-covered mountains. It was also surprising that many of the landings we did were onto small islands, which weren’t ice-covered. I want to try to share what Antarctica is really like, and that it is surprisingly different in real life to what you see online or on television. It surprised me every day and really brought out the explorer in me. Visiting Antarctica has made me want to do more exploring and visit other places I haven’t seen. I badly want to go to the Arctic and K2, and many places in my home country of Afghanistan that I haven’t seen yet.

What skills did you bring to the team, and how were you able to utilise these on the trip?

Although I wasn’t the oldest on the expedition, I think my leadership skills were helpful in helping to support and push the other explorers during low times and keeping spirits lifted, particularly when we were in quarantine. The females on the expedition bonded really well and I tried to bring a positive vibe to the group. Sadra with A’aifou and Jaylee

Any comments about the team itself? What were the strengths of the team? Why do you think it worked well together?

One of our strengths as a team was that we were always communicating and asking each other how we were feeling. This happened right throughout the expedition, whether we were out on the kayaks, during the rough crossing of the Drake Passage, or if anyone was feeling a bit low when we spent the extra week on the ship in quarantine. Everyone was constantly checking in on each other and helping each other out.

I also really appreciated the way the team, led by Marcus, commemorated the March 15 terror attack in Christchurch, during the expedition. That morning after breakfast, we sat down together, talked, shared our thoughts, and had a moment’s silence, which was really nice.

How did you and the team deal with the disruption to your trip caused by COVID-19? Did this experience make you reflect on the challenges faced by the historic explorers? What similarities do you think there might be?

There is a quote I like which has the message ‘you are not taking the journey – the journey is taking you’. Expeditions are so unpredictable, and things can happen at any time. Compared to the historic explorers we had it very easy during the extra week we were quarantined. We were on a luxury boat, with great meals. Even if we had low days, it was still very easy compared to what the historic explorers went through.

A Living Laboratory
Scroll to top
Stay in touch!