A vital part of the TAE/IGY company

The dog teams were a vital part of the TAE/IGY company. All up, there were 60 adult dogs and puppies involved. They were used for surveying work, and for pulling sledges with supplies for the depots being set up for Vivian Fuchs and the Crossing Party. The dogs left visible tracks that the tractors could follow, and they were also back-up in case the vehicles had mechanical failure. 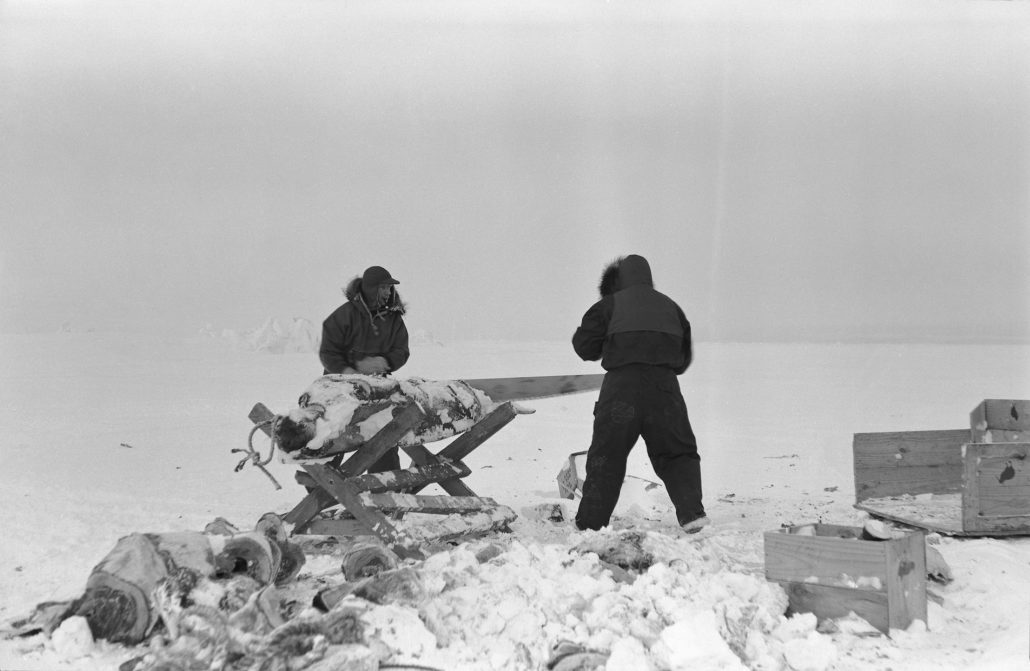 The Ross Sea team spent 16 months down on the Ice. The dogs worked hard and feeding them was a big task in itself. During the first summer and autumn, the men killed dozens of seals for dog food. During the winter, the frozen carcasses had to be sawn into manageable chunks for the dogs to chew. It was hard work and time-consuming. And during a June storm when all the frozen seals were hidden under four feet of snow, they had to resort to giving the hungry dogs tinned meat, which was not ideal.

There were plenty of challenges for the dogs. On a Spring trip to the Emperor Penguin rookery at Cape Crozier the winds were so ferocious that the dog teams were blown off their feet, unable to keep a grip on the ice. The men were forced to dig a separate hole in the ice for each dog to shelter in.

With winter behind them, 4 October 1957 was the start of a four-month expedition of men and their dogs to survey as large as possible an area north of the Polar Plateau. Possibly reacting to the cold, dark months and little activity, the dogs were grumpy and aggressive during the first few days. There was a huge fight from which dog Joe lost the sight in one eye.

Not long after, a dog team fell down a crevasse. With difficulty they were rescued but the dogs then refused to go on because they could see the gaping crevasse in front of them. They made a dash for what looked like solid ground but turned out to be a snow bridge over the crevasse and one of the dogs fell again. Fortunately still in his harness, he was able to be hauled out and the teams were able to leave this dangerous area behind.

Conditions were no easier on the sea ice. Taking the coastal route was better than the rough conditions up the Wilson Piedmont Glacier but the sea ice was often sticky which made it very hard work for the dogs pulling the heavy sledges. At one point it was too much for Nova, a really hardworking dog, and he had to be put on top of the sledge and carried. The sea ice was also prone to cracking and trapping the sledge runners. 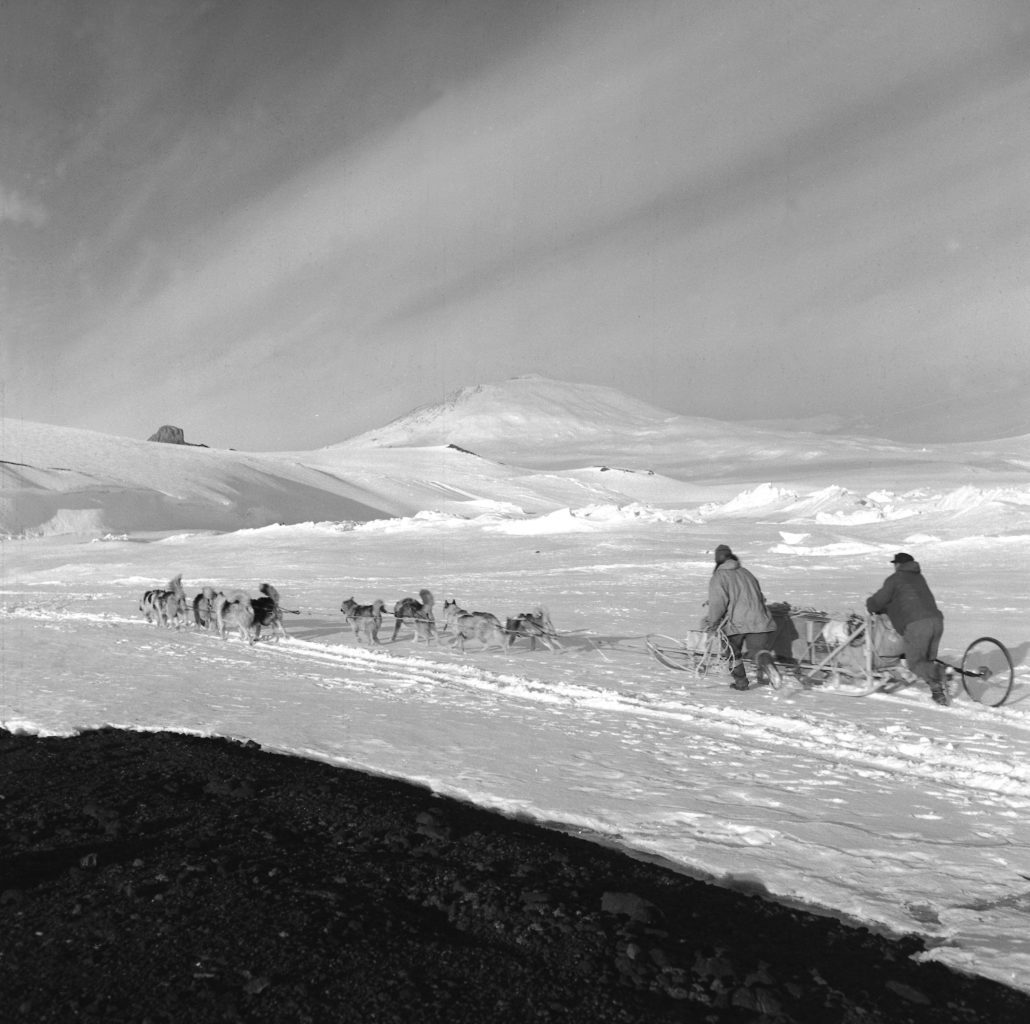 Dog team sets out to find route up Skelton Glacier to Polar Plateau. 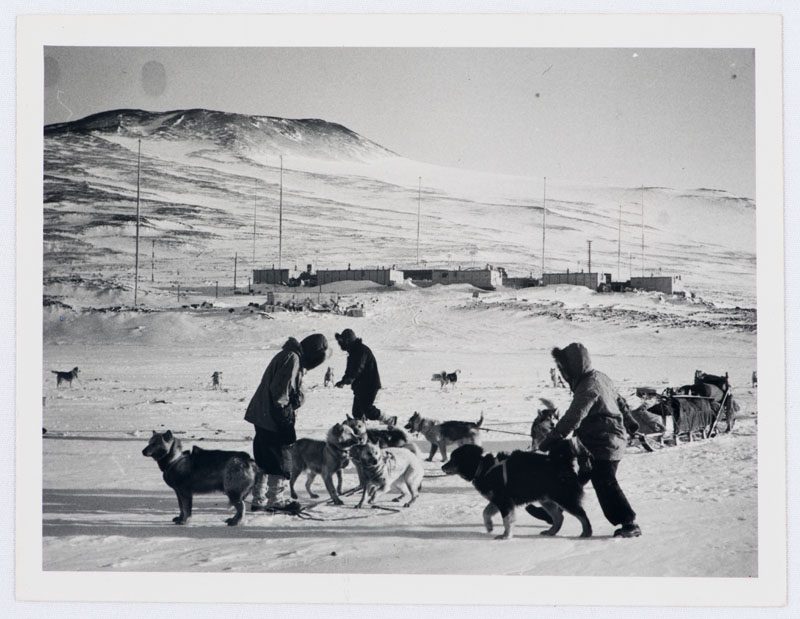 On the main mission

Four dog teams accompanied Hillary’s tractor party. Millar and Marsh set off from Scott Base with Hillary, Bates, Mulgrew, Ellis and Balham; Harry Ayres and Roy Carlyon and their dogs were flown up to the Polar Plateau to join them on the next leg of the journey.

One of the most gruelling parts of the journey was travelling up the Skelton Glacier heading for the Polar Plateau with Sir Ed’s tractor party. At this stage, Bob Millar and George Marsh each had a dog team and on the first day the conditions were awful – the surface of the Glacier was hard and slippery and each of them capsized their sledges several times. Two days later, the winds coming down from the Plateau were at hurricane force and both men and dog could only stop and try to protect themselves by hiding behind their sledges.

Having established the depot on the Polar Plateau, the party set off for D480. Conditions were very difficult and at one point George Millar put one of his exhausted dogs onto the still moving sledge to rest it. In the process he felt himself falling into a crevasse. He managed to save himself and crawl out but the dogs had kept going. Fortunately Harry Ayres was behind him and able to assist. The crevasse was at least 30 metres deep.

Harry Ayres and Roy Carlyon had an even more terrifying episode on a major surveying trip once the depot at D480 had been established. Some days into the survey, a chasm opened up and all nine of Ayres’ dogs and the sledge fell in. With Carlyon’s help, Ayres managed to haul them out. All except ‘Skinny’ who had slipped out of his harness. Skinny had been one of Ayres’ best dogs and he was understandably upset.

George Marsh and Bob Miller had also set off from the Polar Plateau on a surveying and mapping expedition. They recorded new mountain ranges, and collected a significant range of rock specimens which they hauled back to Scott Base. They covered 2700 km, the longest dog sledging journey on record in Antarctica.

“It was an audacious, compelling and utterly courageous expedition by two Antarctic pioneers, and their wonderful dogs.” (Nigel Watson, Hillary’s Antarctica P. 132) 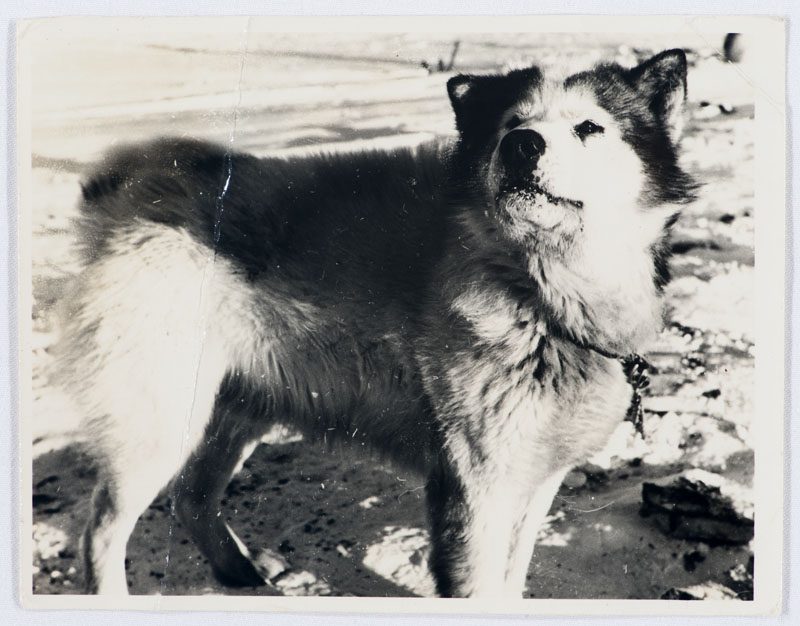 Link to: To the South Pole

Read more on the Exploration: To the South Pole