The largest and most challenging task this 2021/22 season was at Shackleton’s Nimrod hut at Cape Royds.

The three whisky crates were excavated and one crate was flown to New Zealand to be carefully thawed by the Trust in a purpose-built environment and public gallery at Canterbury Museum. Eleven bottles of the 114-year old whisky were revealed, still sheathed in their paper and straw packaging.

After delicate conservation, the then owner of Whyte & Mackay (which owns the Mackinlay brand), flew to New Zealand to see the extraordinary find. Under permit from the New Zealand Government, he transported three bottles to Scotland on his private jet for scientific analysis by Whyte & Mackay and The Scotch Whisky Research Institute.

In a unique opportunity for the whisky world, the bottles were subjected to sensory and chemical analysis to establish the flavour and composition of a product manufactured a century earlier. In April 2011, Whyte & Mackay’s master blender, Richard Paterson, successfully recreated an exact replica of the century-old whisky and Mackinlay’s Rare Old Highland Malt Whisky was born. 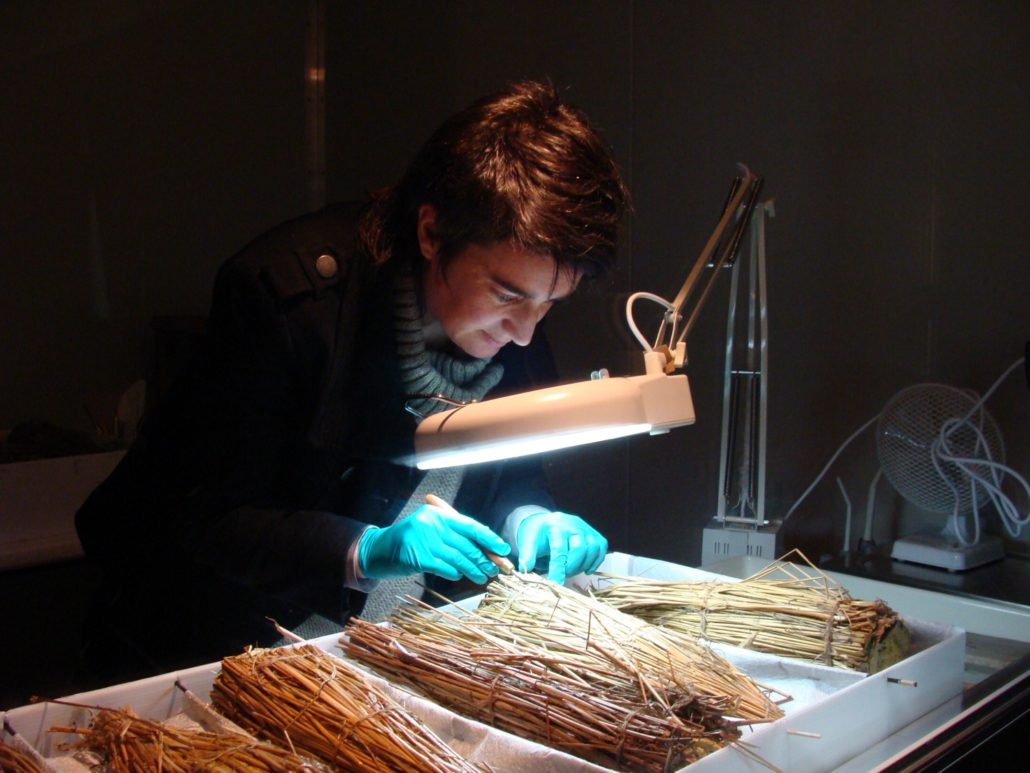 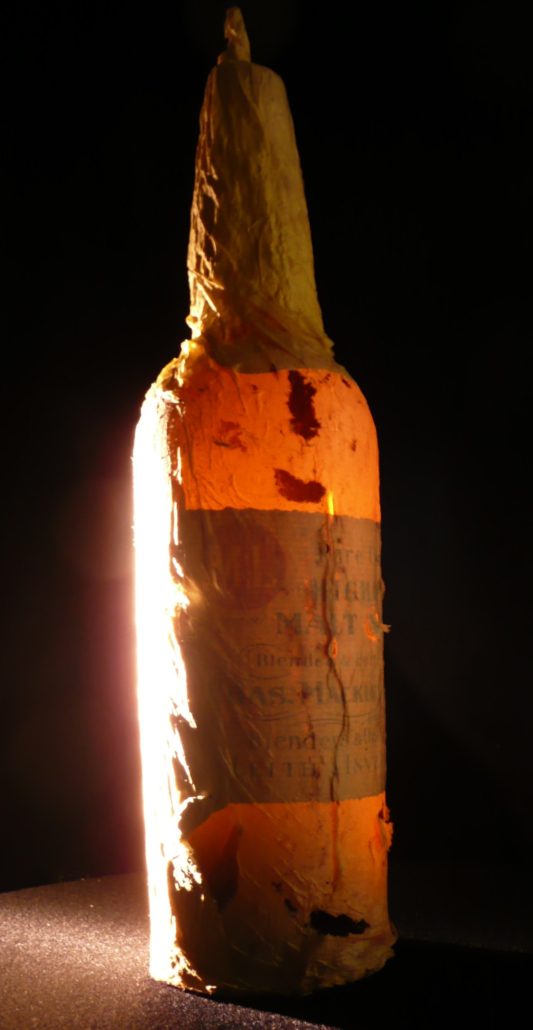 The whisky proved so popular that in late 2012, a second edition, ‘The Journey’, was released. Both editions have resulted in a substantial donation to the Trust’s conservation work in Antarctica.

The National Geographic Channel’s Expedition Whisky documentary and author Neville Peat’s excellent book, Shackleton’s Whisky, have both recorded the whisky’s journey from obscurity to world-wide attention. Meanwhile, whisky lovers the world over are enjoying the replica whisky. They are in good company. The whisky has been gifted to, and by, heads of state and royalty.

In January 2013, the Shackleton whisky story came full circle with New Zealand Prime Minister the Rt Hon. John Key repatriating the three bottles of original whisky to the Trust’s staff in Antarctica. The final stage in a remarkable journey for the world’s best aged and travelled whisky was the return of the original crates to Ernest Shackleton’s 1908 base at Cape Royds. 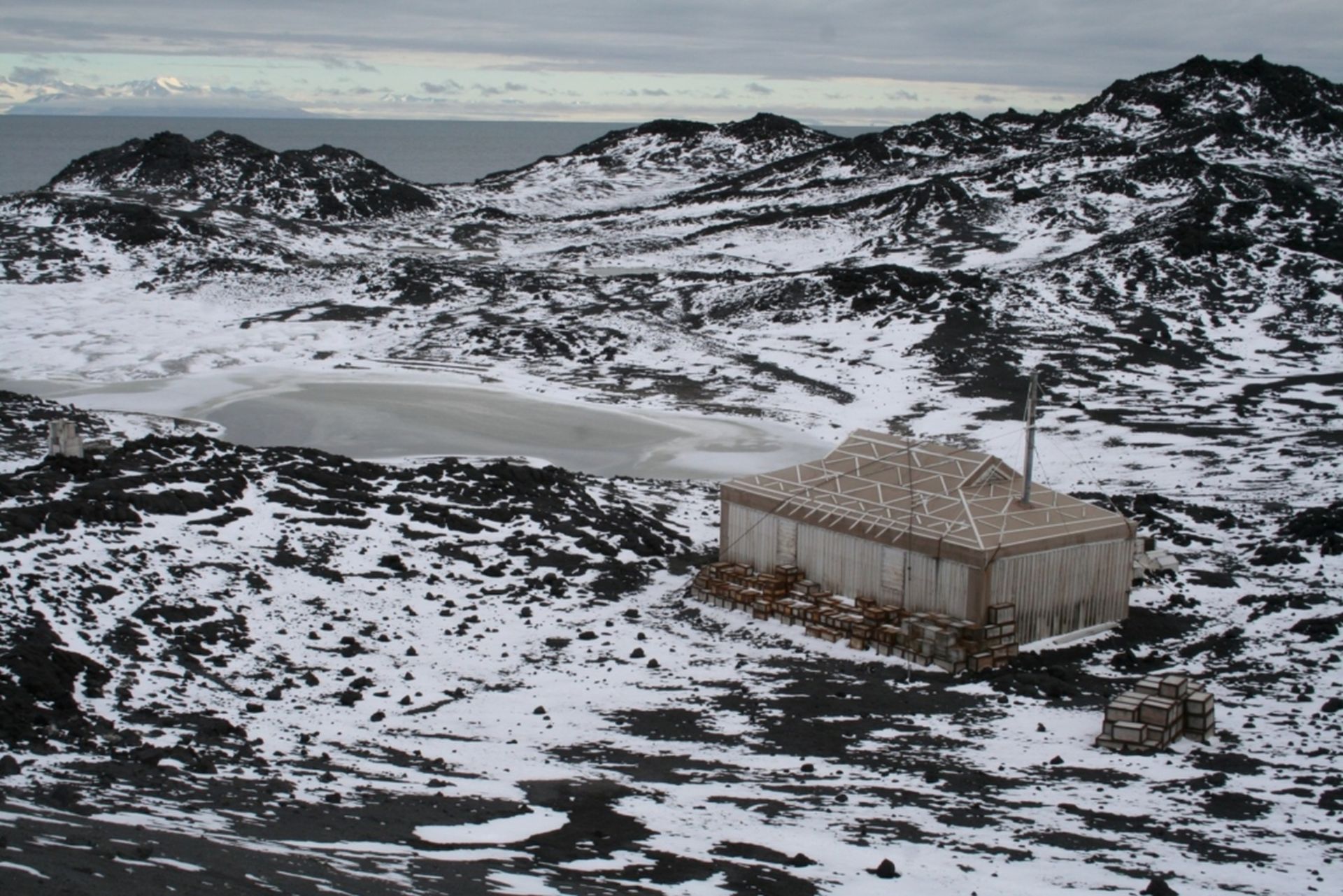 Shackleton’s Nimrod hut sits on an ice-free area of rock at Cape Royds, next to Pony Lake.

Antarctic Heritage Trust has returned a carefully reconstructed beer barrel to the Antarctic hut that was home to Sir Ernest Shackleton’s historic ‘Nimrod’ expedition in 1908.

Shackleton’s hut at Cape Royds is also where the Trust found three crates of Mackinlay’s whisky encased in ice; a discovery that attracted global attention. 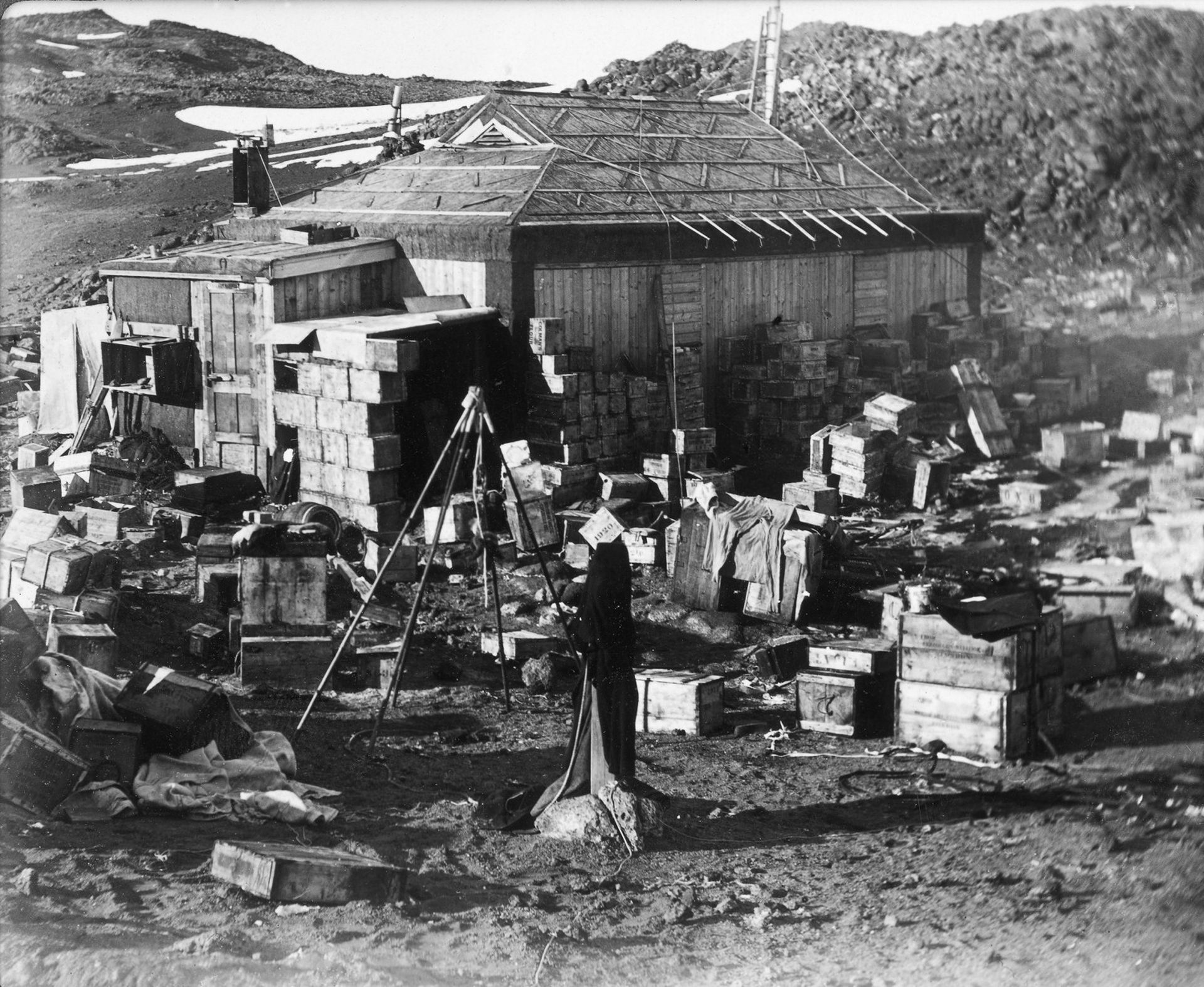 The barrel of beer was originally donated to Shackleton by New Zealand brewer Speight’s in 1907.  Its iron hoops and staves were pulled out of Pony Lake, alongside the Cape Royds hut, by caretakers in the 1970s. 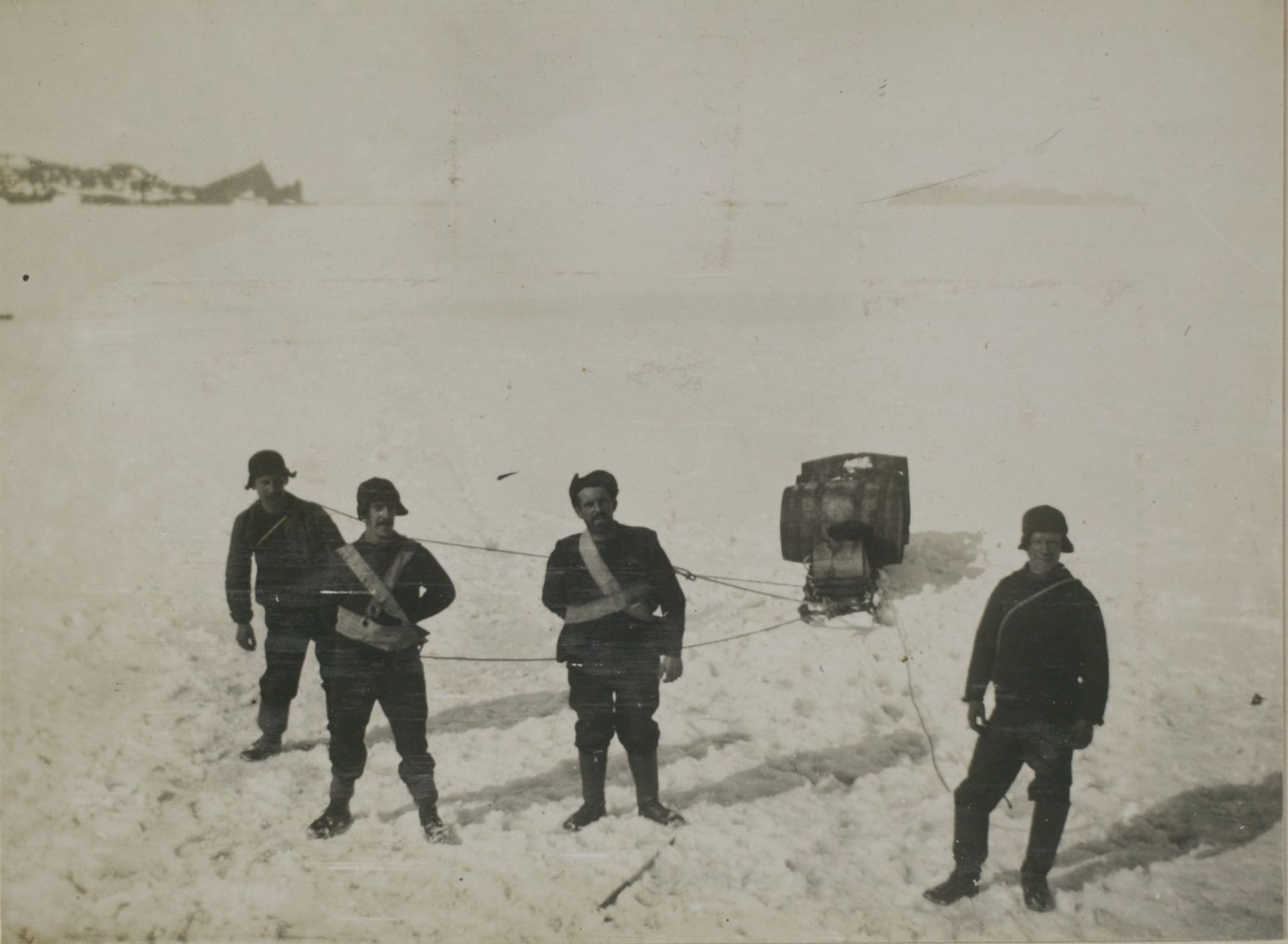 The Trust’s Programme Manager-Artefacts Lizzie Meek says the barrel pieces were left near the hut and remained there, embedded in ice, for decades.When the Trust started major conservation work at the site in 2005, the staves and hoops were leaned up against an area adjacent to the latrine and the pony stables.“The Trust spent four years conserving the hut, finishing in 2008. During that project, we saw some of the staves half buried in the ice and put a plan in place to excavate and conserve them. 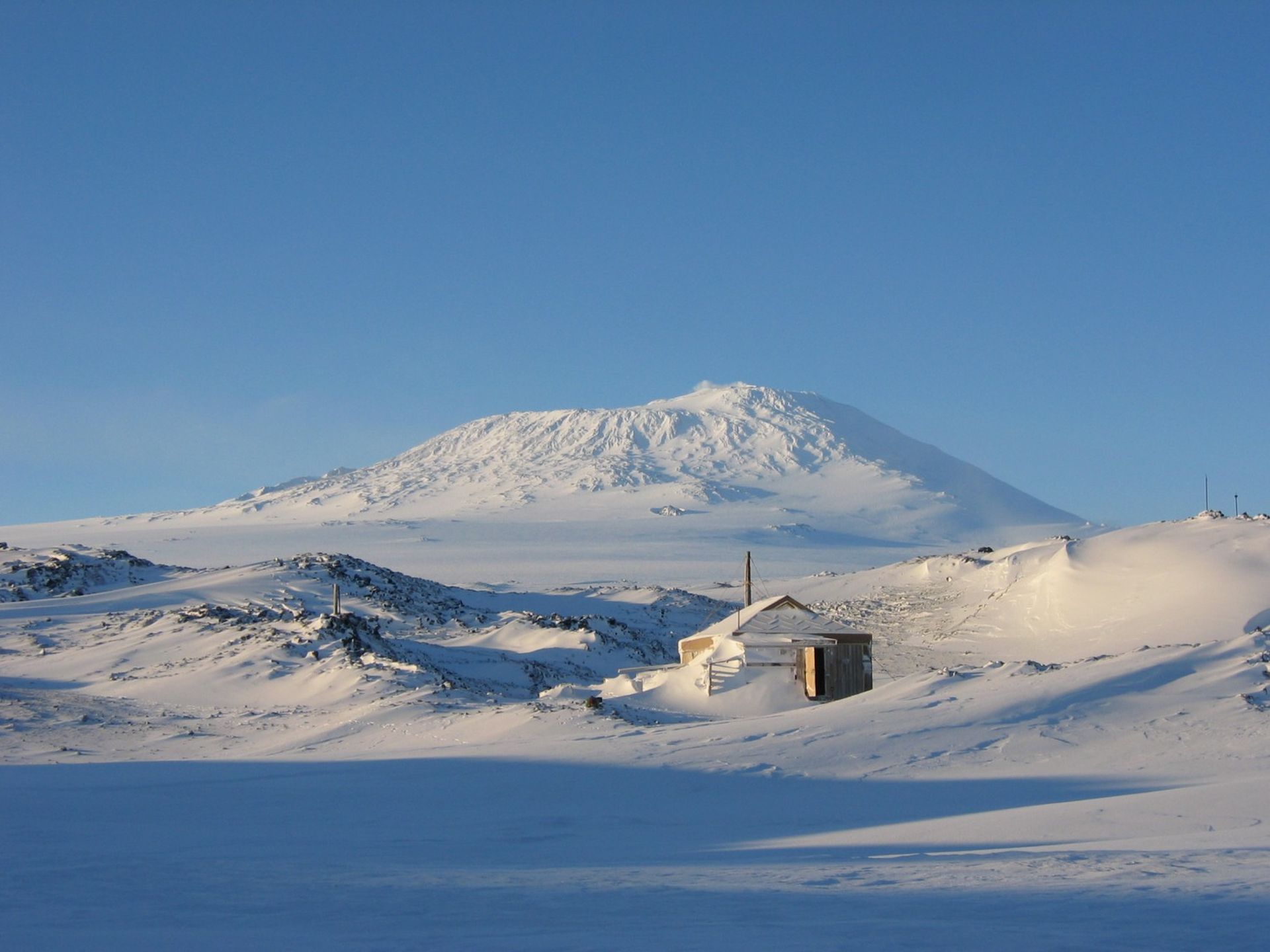 “It took some time but we managed to get them back to New Zealand in 2016. One of the staves has a bunghole and is engraved with the words ‘Speight’s’ and ‘Dunedin’ so we knew it was a beer barrel from the brewery.” 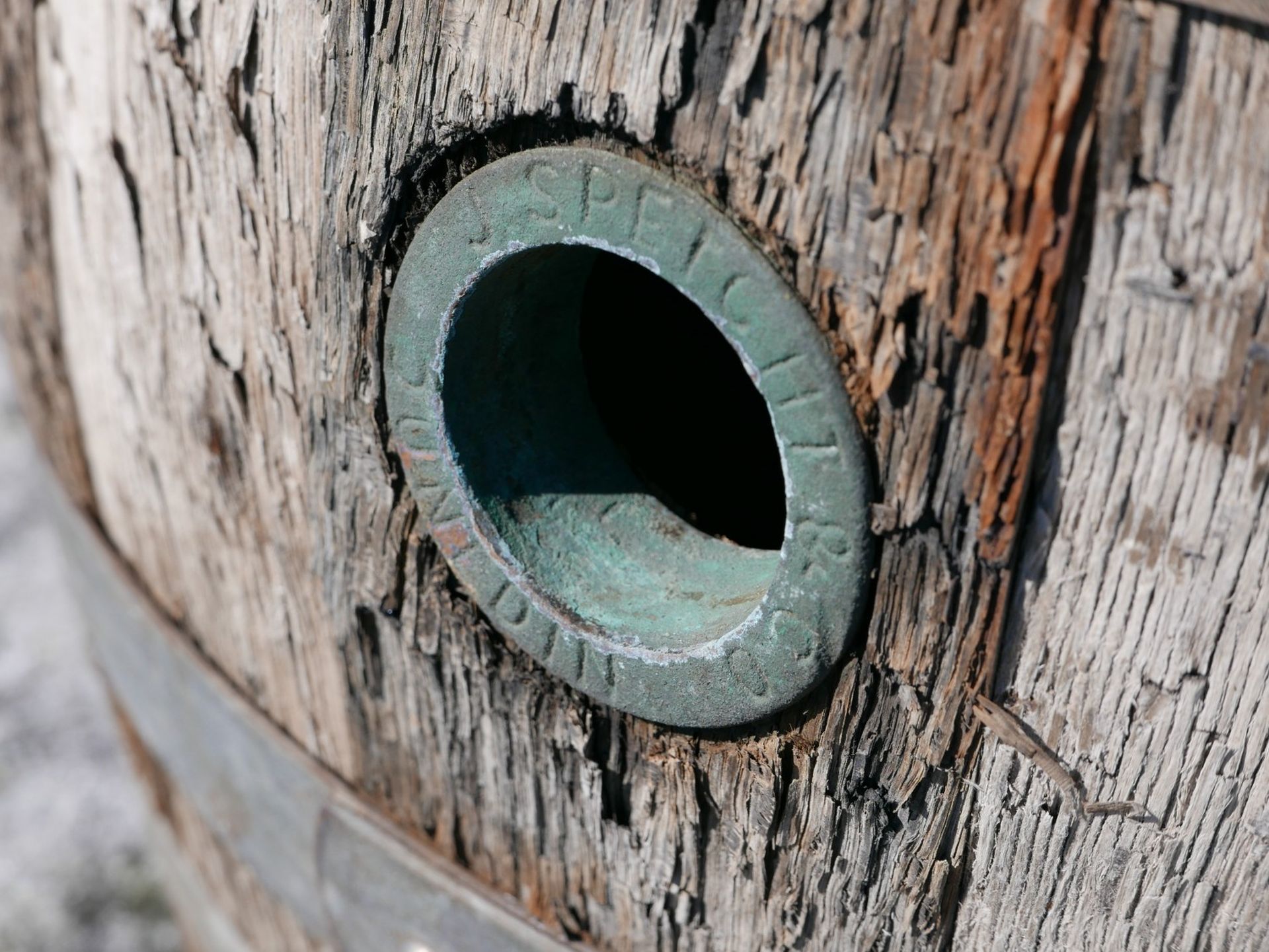 The barrel bunghole on one of the recovered staves is engraved with the words ‘Speight’s’ and ‘Dunedin’.

Once in New Zealand, the barrel underwent a detailed examination by the Trust’s conservators in a laboratory at Canterbury Museum. “The iron hoops were too badly corroded to be used to reconstruct the barrel but many of the staves were in suitable condition,” says Lizzie Meek. AHT then connected with one of New Zealand’s only practising coopers, Jurgen Voigtlander, and worked with him to re-build the Speight’s barrel. The Trust was grateful to Speight’s Dunedin for supplying some staves for the reconstruction of the barrel. 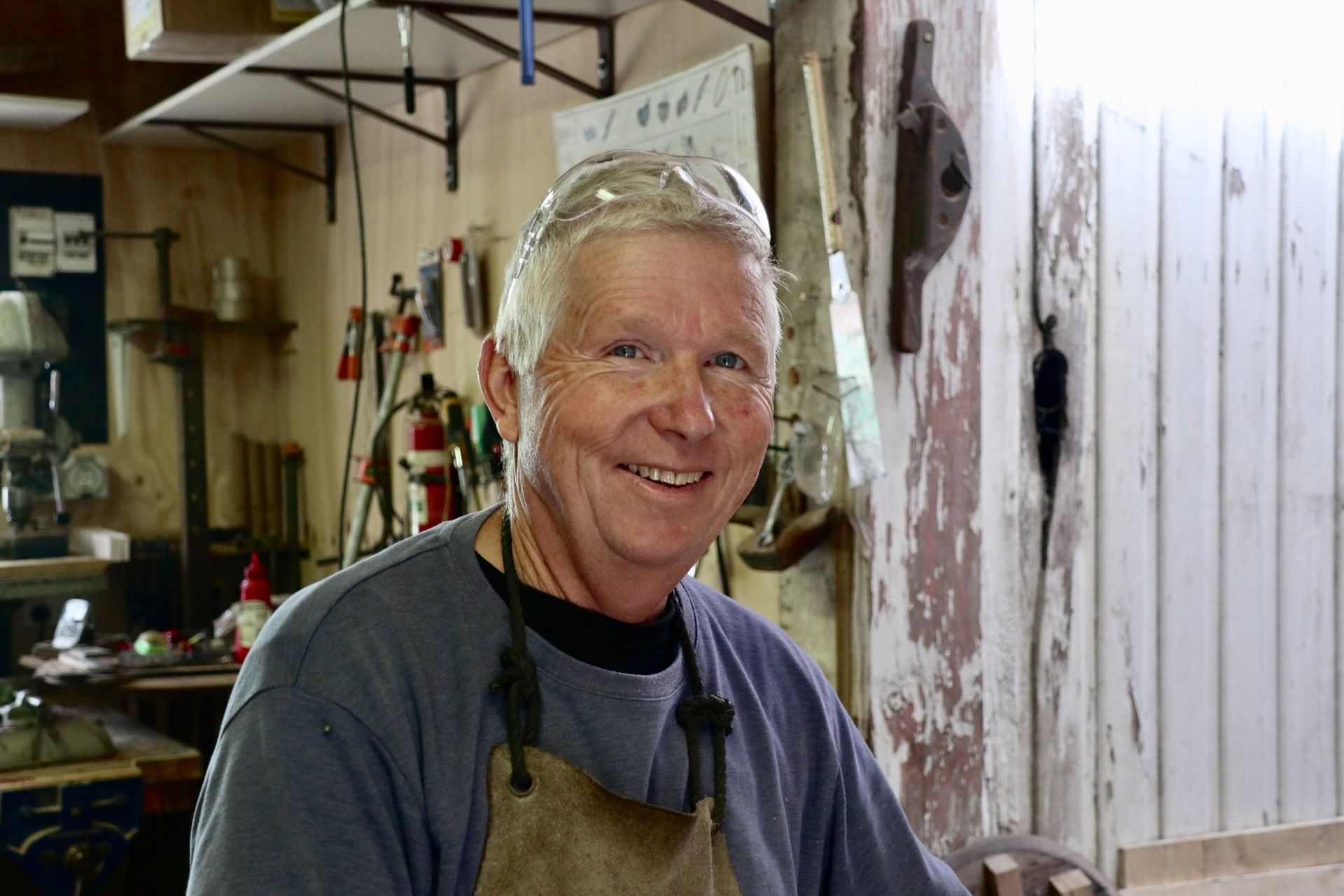 One of New Zealand’s only practising coopers, Jurgen Voigtlander, re-built the Speight’s barrel

“Jurgen established a repair strategy after a lot of research and trial assembly. It wasn’t an easy job given that, over the years, the original staves had lost some of their curvature and were heavily eroded. But Jurgen painstakingly rebuilt the barrel, using traditional techniques, the original staves, new iron and some new wooden elements. We were delighted with the result.”AHT paid for the conservation of the barrel and it was taken back to site with logistics support from Antarctica New Zealand. 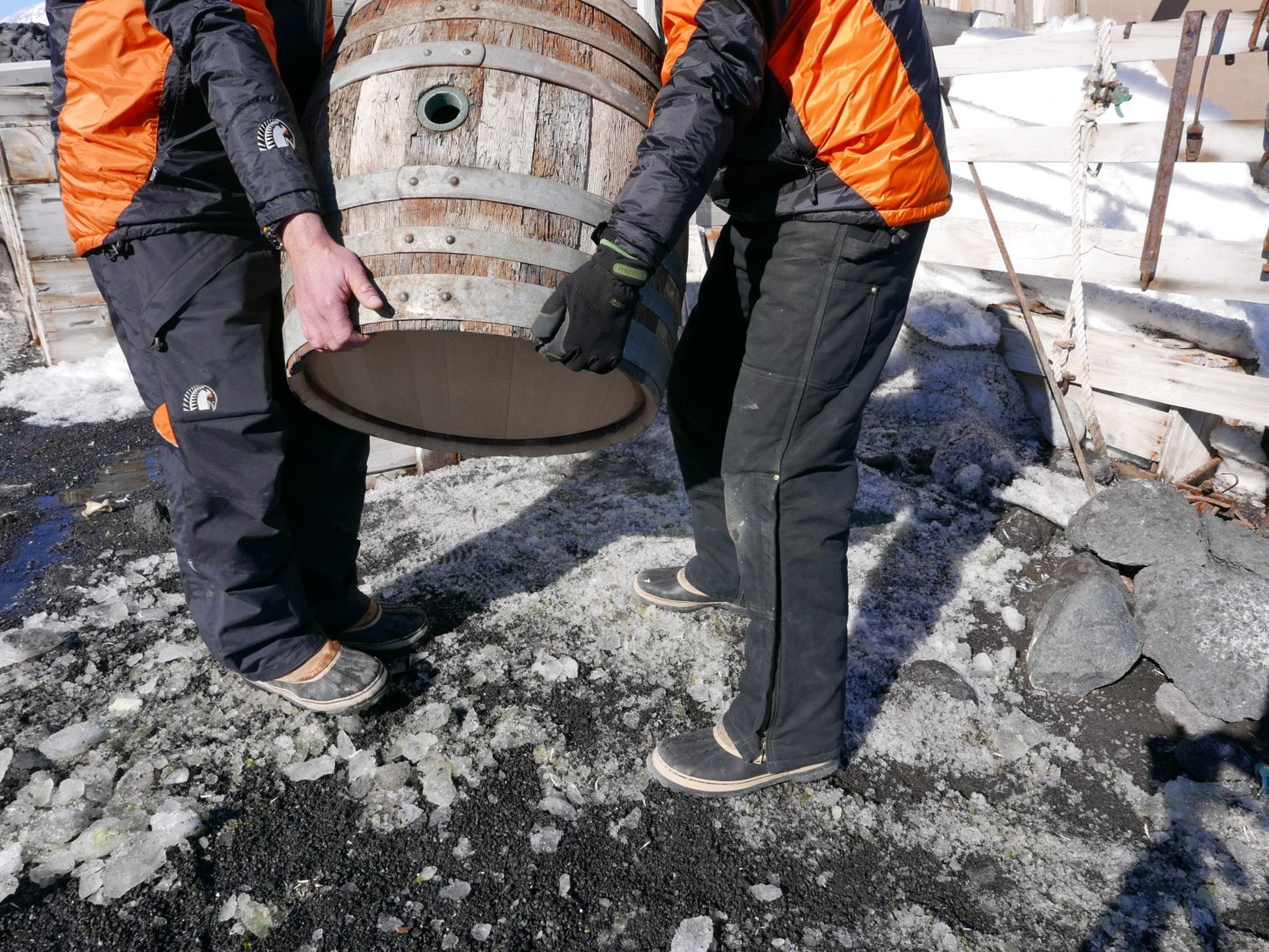 The Speight’s barrel was carefully positioned outside Shackleton’s hut by the Trust’s conservation team.

The Cape Royds hut sits in an Antarctic Specially Protected Area (ASPA) which means permits are required to remove anything from the area and anything temporarily removed has to be returned.

Returning the barrel to Antarctica

Transporting the barrel back to its home at Cape Royds held a few challenges. Logistics between Christchurch and Antarctica are operated by the United States and New Zealand Antarctic Programmes. The first stage of the journey was packing it for transit from Christchurch to Phoenix runway in McMurdo Sound on board an American C-17. A large Antarctic storm cycle caused a 2-week delay to the start of the summer on-ice season, preventing aircraft from landing and causing the Trust some anxiety, as staff and cargo were waiting in Christchurch. However, the system caught up and both barrel and staff arrived in Antarctica in time for the next stage of the journey. Once at Scott Base, the barrel was gradually exposed to lower temperatures, eventually being stored (wrapped) outside at ambient temperatures of around -15 degrees C. The distance between Scott Base and Cape Royds is a little under 40km, and the terrain is a mix of the lower slopes of the active volcano Mt Erebus, and frozen sea ice. The barrel was transported to a ridgeline near Shackleton’s historic hut using a container slung underneath a Southern Lakes helicopter. From the top of the ridge, the AHT team transferred the barrel to a polypropylene sled and towed it down the hill to its final resting place outside Shackleton’s Nimrod hut. 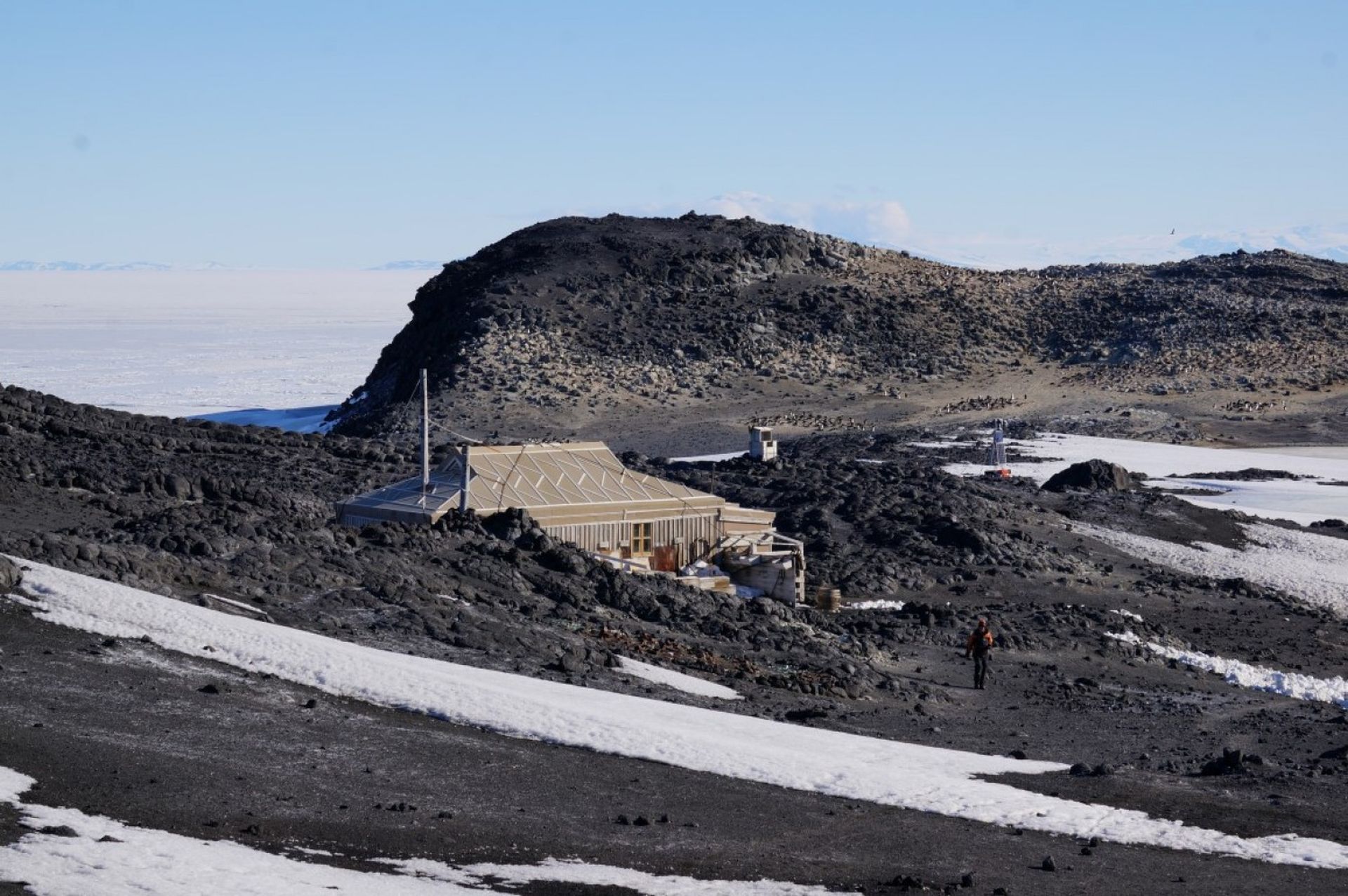 This area and adjacent areas were used by Shackleton’s expedition to stage/store all sorts of equipment, food cases and barrels. There was a constant ebb and flow of different items. The barrel is too large to fit comfortably inside the hut, and like the stores boxes also found outside the hut, forms part of the story of the enormous quantity of supplies needed for an over-wintering party of 15 men, as well as dogs, ponies and a motor car. 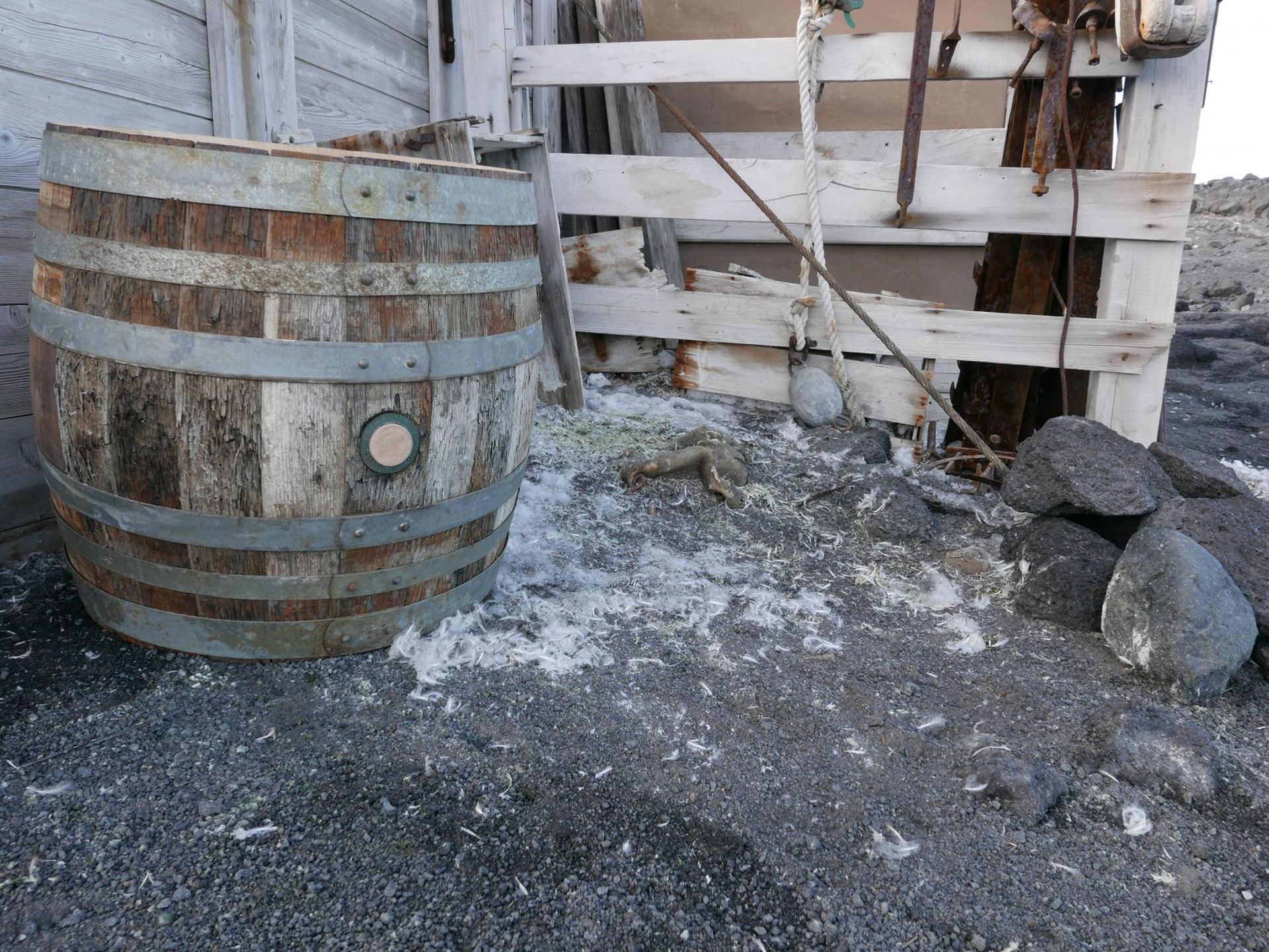 The Speight’s barrel is now in position outside Shackleton’s Hut.

Trust Executive Director Nigel Watson says it was a poignant moment to see the barrel be returned there.“Just as when we returned Shackleton’s whisky to the ice, there was some celebration at the barrel’s return. Conserving Antarctic artefacts is an incredibly meticulous process so it’s always satisfying to see them put back with a new lease on life that will see them survive for generations to come,” concludes Nigel.

What happened to the beer?

Beer will freeze if left outside on all but the warmest of Antarctic summer days, and in fact the beer may even have been consumed during a special occasion on the ship (SS Nimrod) and the barrel re-purposed for another use. We have not yet found a record that detailed, but some records indicate that the tragic accident where Captain Aeneas Mackintosh lost an eye, was caused when a hook carrying up a barrel of beer from the Nimrod’s hold, sprang loose and hit him in the head. 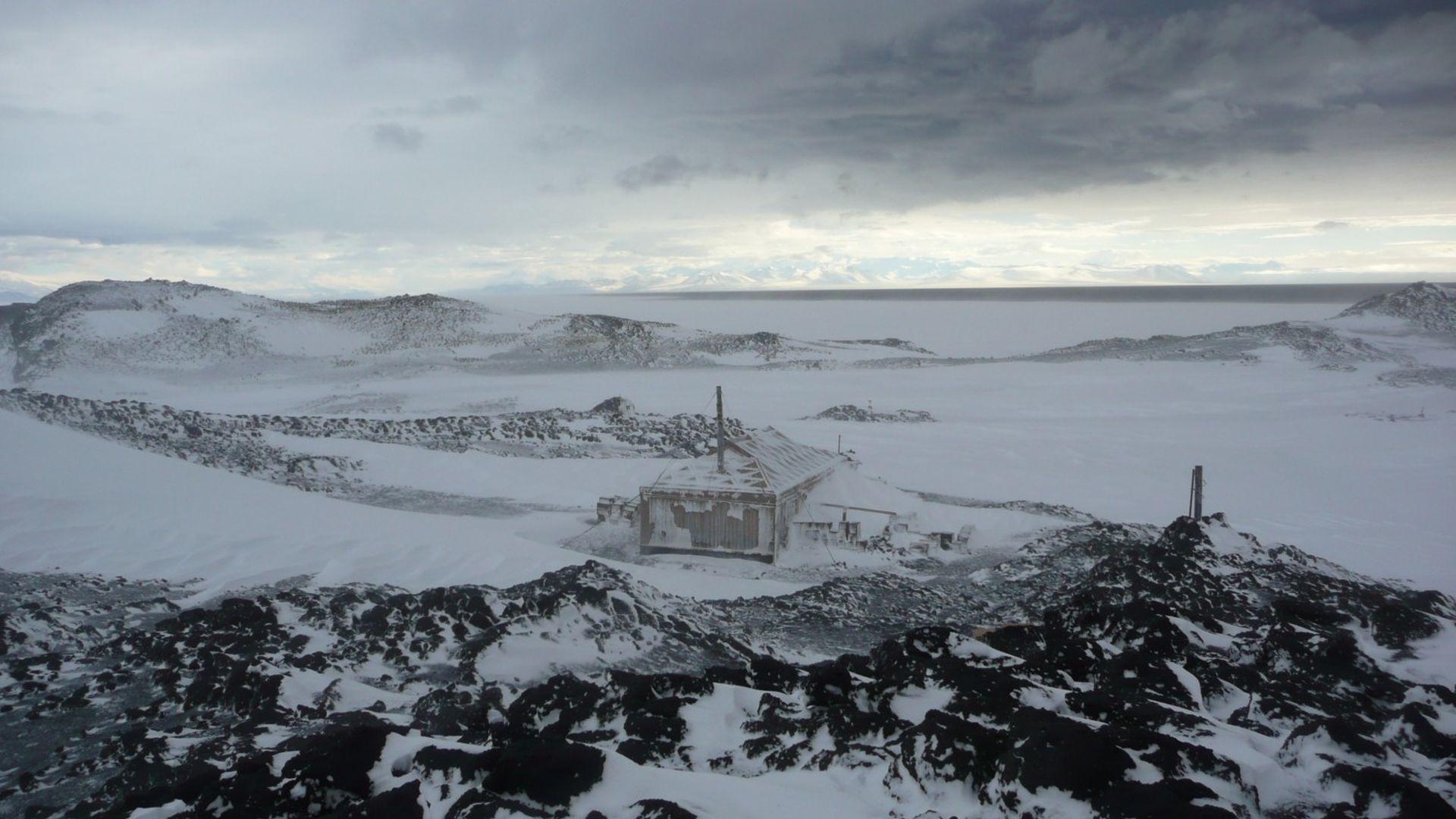 The barrel location provides shelter from the two prevailing winds at the site (north and south winds), which lowers the damage caused by wind and ice erosion, and protects the barrel from being moved by the stronger gusts during storms.Part of the work the Trust carries out on an annual basis is snow removal, monitoring and maintenance of all aspects of the building and artefact collection. Over the next few years we will be checking the barrel on each visit, and will keep an eye on its condition. 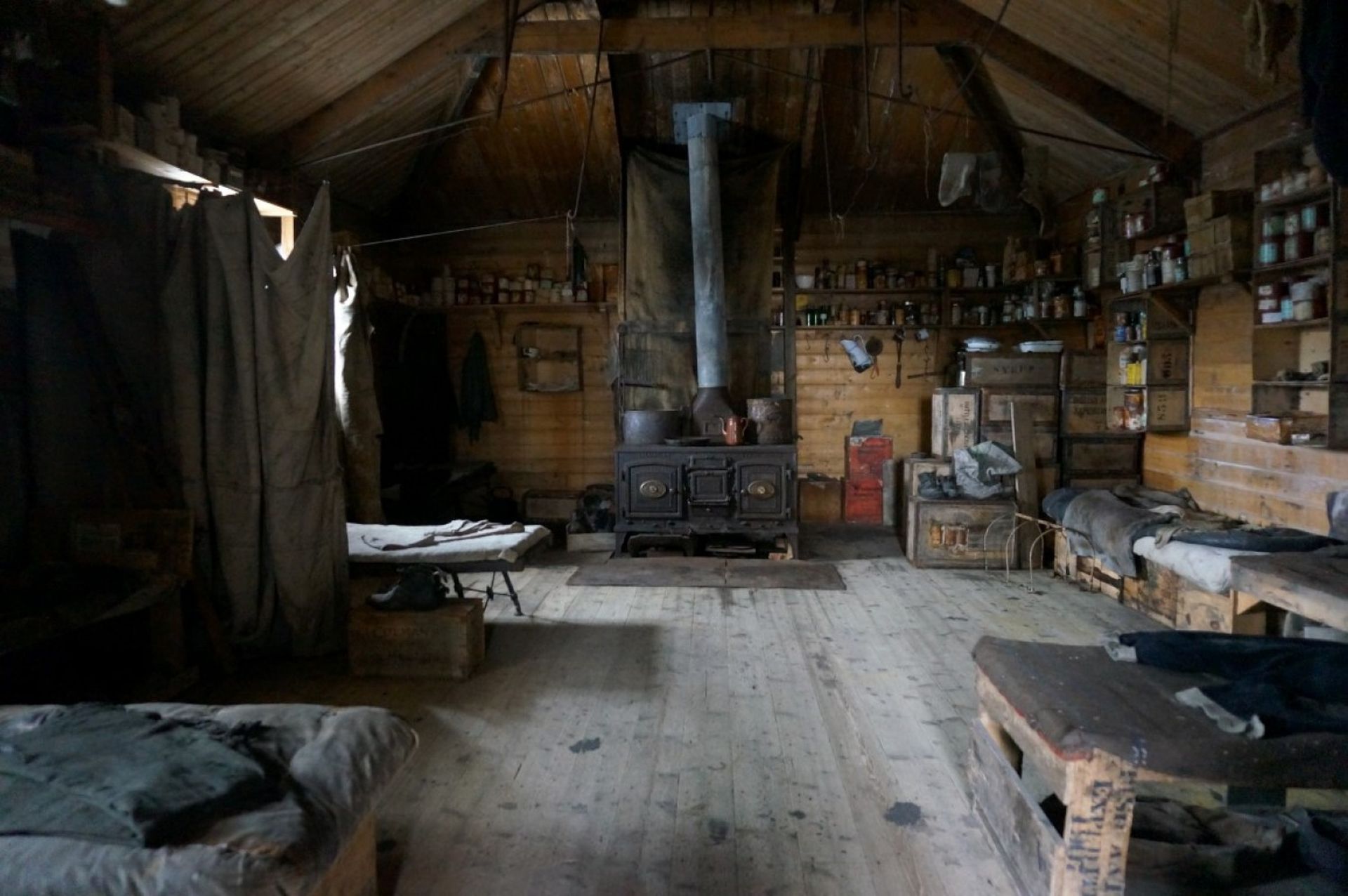 The interior of Shackleton’s Hut.